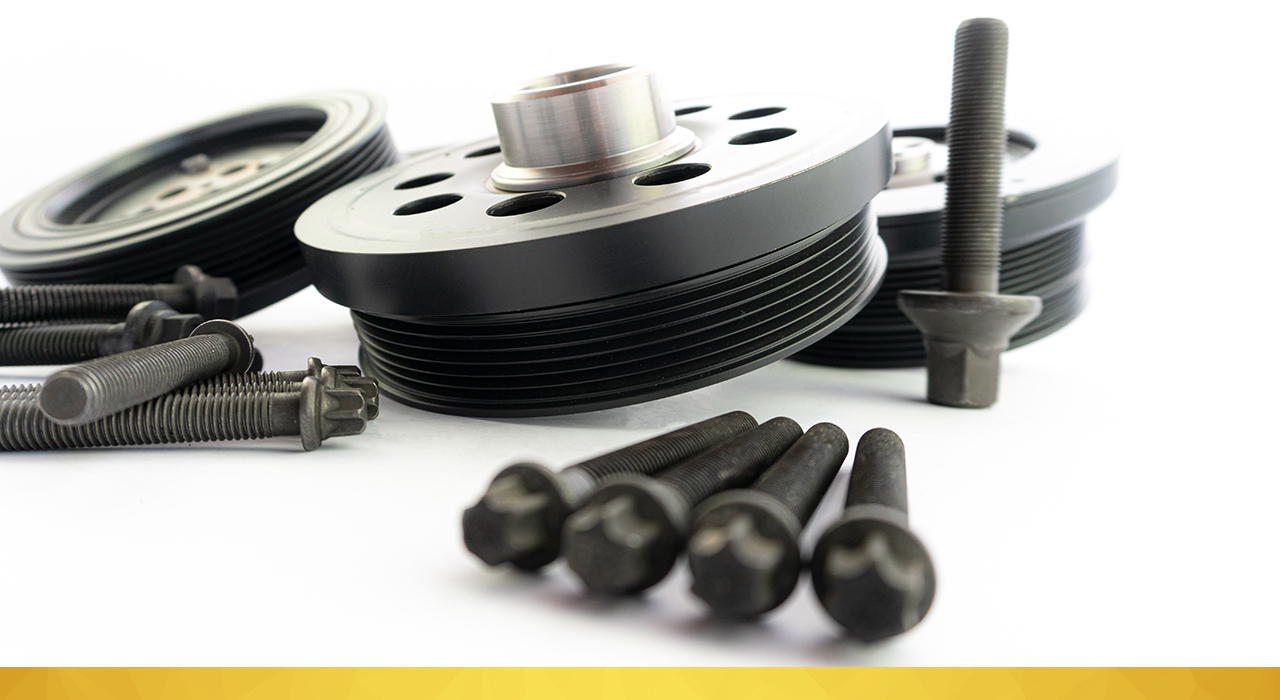 History of the Crank Shaft Pulley

Crankshaft pulleys – commonly known on the whole as Torsional Vibration Dampers (TVDs) are one of the most unassuming parts of the engine yet are critical in stopping damage to major components such as the crankshaft, its bearings and also, but not limited to damage to connected ancillaries such as the air conditioning compressor, water pump etc. Originally invented at the dawn of the 20th Century by Frederick W. Lanchester, the father of the British Motorcar. Lanchester has many automotive inventions to his name, including the accelerator pedal, steering wheel and even invented a self-charging petrol electric Hybrid! Lanchester’s TVD solved the issue of torsional and harmonic vibrations caused by the crankshaft and allowed for much higher piston speeds than previously thought possible, thus improved power and efficiency.

Aside from transferring power, crankshaft pulleys are constantly under pressure to reduce vibrations from the crankshaft, as a result of the combustion cycle. Two types exist – Torsional Vibration Damper (TVD) pulleys, also known as Decoupled Damper pulleys, are designed to absorb the torsional twisting occurring on the crank through the combustion phases. Secondly, they are designed to adsorb the harmonic vibration caused when the crank hits the right ‘note’. Much like a tuning fork, every solid item has a certain frequency that it vibrates strongly at. This is known as the resonant frequency. If the crank achieves its resonant frequency during the rev range it will vibrate much stronger than before, potentially causing catastrophic damage. This harmonic vibration needs to be tuned out so it occurs at a frequency that the crank can’t achieve through its normal rev range. In some engine designs, the crankshaft pulley is only required to retune just the resonant frequency. These pulleys are known as simple harmonic dampers. It’s clear to see that crankshaft pulleys play a critical role in engine function. Modern engine design has meant lightening of components to eek out efficiency. As a result Crankshafts have suffered and become lighter and thus more flexible, making the TVD even more important.

Rubber to the rescue

Crankshaft pulleys are made by sandwiching a rubber layer between the inner and outer housing of the pulley. This type is the harmonic damper pulley. Some designs allow for two sections of rubber, with one acting as the harmonic vibration damper, the other, to combat torsional vibration. This is the ‘real’ TVD. In some engine designs, weights are added to the pulley to balance the rotating mass within the crank. All TVDs must be replaced before full failure occurs which will result in serious consequences. A poorly functioning TVD will lead to an increase in engine noise, crank bearing wear and possibly lead to complete crankshaft failure resulting in extensive damage. Loss of power, fuel and emissions are also symptoms of a failing TVD, not to mention a belt squeaking which isn’t fixed with replacement of other components.

BGA’s Crankshaft pulleys are produced to meet and exceed OE standards. Testing in comparison to OE. BGA then ensures perfect balance, weight and importantly harmonic and torsional vibration protection. BGA’s Crankshaft pulleys have been designed by their experienced Technical Engineering Team at the BGA HQ in the heart of Wiltshire, UK. The technology used in BGA’s Crankshaft pulleys has been built up over the years thanks to their own research into mechanical vibration engineering. BGA’s range of crankshaft pulleys and crankshaft pulley kits use the latest generation of vibration reduction technology and techniques. For additional peace of mind, BGA also analyse the products against OE including metallurgical analysis of the component and shore hardness testing of the rubber to ensure that the product exceeds quality control standards. This is then followed by testing to destruction alongside and in comparison with the OE part.

BGA provides the most relevant and up-to-date range of Crankshaft Pulleys in the aftermarket. With over 400 different references available, BGA’s Crankshaft Pulley range covers in excess of 5,000 applications. BGA’s range is nearly twice the size of the nearest competitor. It’s the biggest in the Aftermarket. All engineered in the UK manufactured to match and surpass OE standards.

Furthermore, BGA supplies market leading kits to give the installer everything they need to complete the job. Most TVDs use TTY Bolts (Torque to Yield) also known as stretch bolts which can’t be reused so BGA’s kits are helping to save time and money. In fact, over 65% of all Crankshaft pulleys sold by BGA are now kit form.

Utilising BGA’s OE manufacturing heritage we are able to ensure perfect rubber to metal bonding and correct shore hardness of the rubber components used in the dampers giving the best quality in the aftermarket.

When buying a BGA Crankshaft pulley – you are not only buying a kit that is 100% fit for purpose, meeting OE standards or higher but also buying the vast experience that comes with BGA in Sales, Marketing, Technical and Warranty.

Dont miss out on the latest Automotive Aftermarket news from BGA!